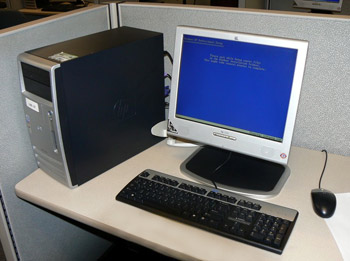 Out of the Box

Recently I was able to get my hands on one of the new Xbox Kinects. For those who don’t know the Xbox Kinect is Microsoft’s answer to the Nintendo Wii and PlayStation Move. It is essentially a camera that you mount above or below your TV and it senses your movements then translates them into movements in your video game. For instance, in a driving game you take put your arms in front of you and pretend to drive a car. It works alright for the most part but it does take a while to get use to. However one problem that I have run into with the Kinect is the way you connect the Kinect to your TV (No pun intended).

The Xbox Kinect comes out of the box with a 9 foot cable. This is a slight problem with the way my Home Theater is set up. See my home has the TV Mounted on the Wall and I have my Xbox elsewhere in a near by closet. This is much further then 9 feet.

After looking around for a way to extend the cable, most of what I was finding was the Microsoft branded extension cable that will run you about 50 dollars and it is only 10ft extension. Still not good enough for my needs. So I started looking at USB extension cables. The Xbox Kinect, when you purchase it on its own, will come with a USB converter cable that turns the special Kinect cable into a USB connection. So I started trying out a few different extension cables that I had available to me.

I first tried out a standard 6 foot Passive USB extension. This did not work what so ever. The Kinect would not recognize that it was even plugged into the Xbox. I then tried out an active extension cable. I used a Sewell 16ft Active Extension cable (you can get them at various places but I find this one to be the best deal)

After testing the Active extension cable it worked great. After plugging it in, the Kinect fired right up and the Xbox recognized the Kinect instantly. The guys at Sewell say they have tested it with these 16ft cables while daisy chaining them all together and have said it works. They even have a YouTube showing how it works.

Bigger Does Not Always Mean Better…

I also was able to try a 33 foot active extension cable and it did not work. For some reason you can daisy chain the 16 foot extensions together but the 33 foot extensions do not work. Most likely it needs the active repeaters to be at those 16 foot intervals or it cant keep the signal constant. So if you need to extend your Xbox Kinect grab yourself a couple USB Active Extension cables and you should be fine.

Note: Make sure that you have the USB connection on your Kinect and not the special Xbox Kinect connection, if you have one of those and not a USB, then you will have to buy the converter or just go for the expensive Microsoft cable

Also if you have a PlayStation Move, these also connect via USB so you can use the same cables for those as well. Sewell Direct has a video of testing them with the Move and it seems to have the same limitations, you have to use the 16ft extension cables and not the 33 ft extension cables

See also  Best Console Games to Get You Fit